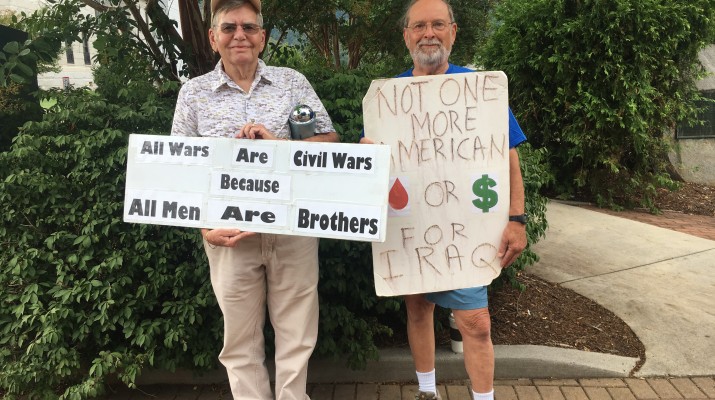 Some might call it serendipity, but I call it being late. Again. I had gotten distracted and missed my turn, so I had to cut through main street to get where I needed to be. Frantically trying to explain my situation on the phone, I almost didn’t see the small group of people standing outside the courthouse. A large sign caught my eye, reading “All wars are civil wars because all men are brothers.” I thought that was a very nice sentiment, so I waved as I passed by.
My situation cleared up, I now had a few minutes to spare. I mulled over the sign, and on a whim, pulled into the nearest parking spot and walked back to the small congregation. After introducing myself, my first question was quite obviously, “What are you all doing?” I was greeted by friendly greetings and smiles from a group called Neighbors for Peace. As they explained to me, this group has been meeting outside the Waynesville Courthouse since six months before the war in Iraq began. Another pressing question of mine was if they’re a protest group. Surprisingly, “No.” was the answer I received. They’re a peace activist group, meaning they advocate for and seek to educate about peace. They aim to create a mentality of seeking a peaceful resolution to conflict first.
I returned for several weeks, and we began talking about all manner of issues in the world, and I felt that it begged the question: how can we keep from feeling like it’s all too much? Mr. Scardaci, one of the members, shared something that moved me. He told me that mindfulness is the key. “It’s extremely important for young people to not become overwhelmed,” Mr. Scardaci observed as he waved to several smiling passerby. He explained that while there’s no doubt that there are a lot of problems in the world that need fixing, one person can’t do it all. Instead, focusing on one thing you are passionate about, your “it,” if you will, makes it much more likely for you to have a greater impact on the issue at hand.
If you’re interested in joining or have any questions, Neighbors for Peace meet every Wednesday from 4pm to 5pm in front of the Waynesville Courthouse. 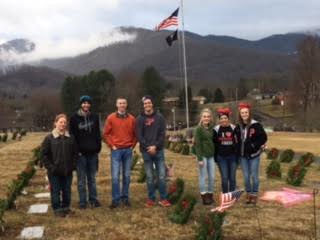 One thought on “Neighbors for Peace”